Giving Thanks To Indies :)

If you missed it, here is the Silver Spook Thanksgiving Stream! I will also be streaming again doing game dev this Saturday, so be sure to stop by! If you are a developer, I will generally give you a shoutout mid-stream just for stopping in. :)

Featuring music by Scott Smigiel https://s-smigiel.bandcamp.com/releases
Plus, a Thanksgiving Poem by William S. Burroughs, and "Burn Your Village To The Ground" by A Tribe Called Red.
Posted by Unknown at 1:59 AM No comments:

Neofeud is 33% Off + Thanksgiving Livestream Party! 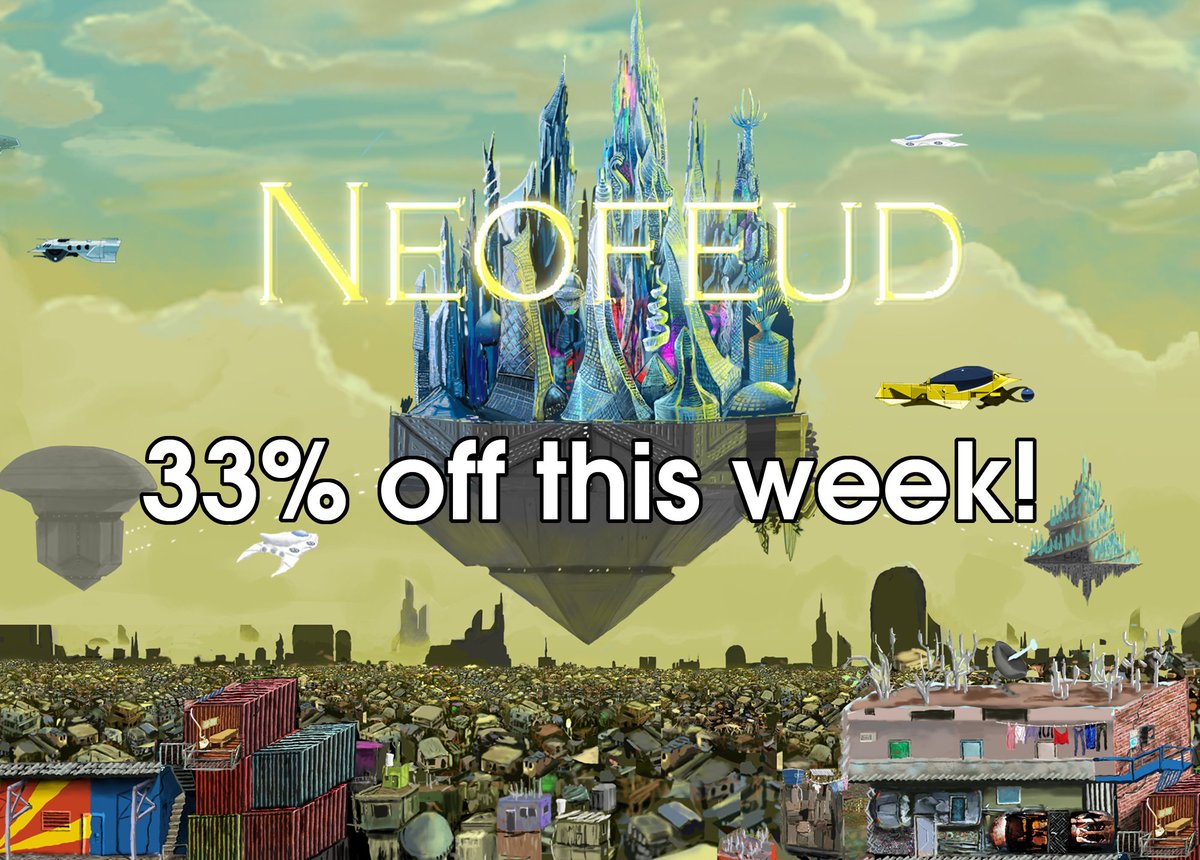 So first off, Neofeud is 33% off this week on Steam! 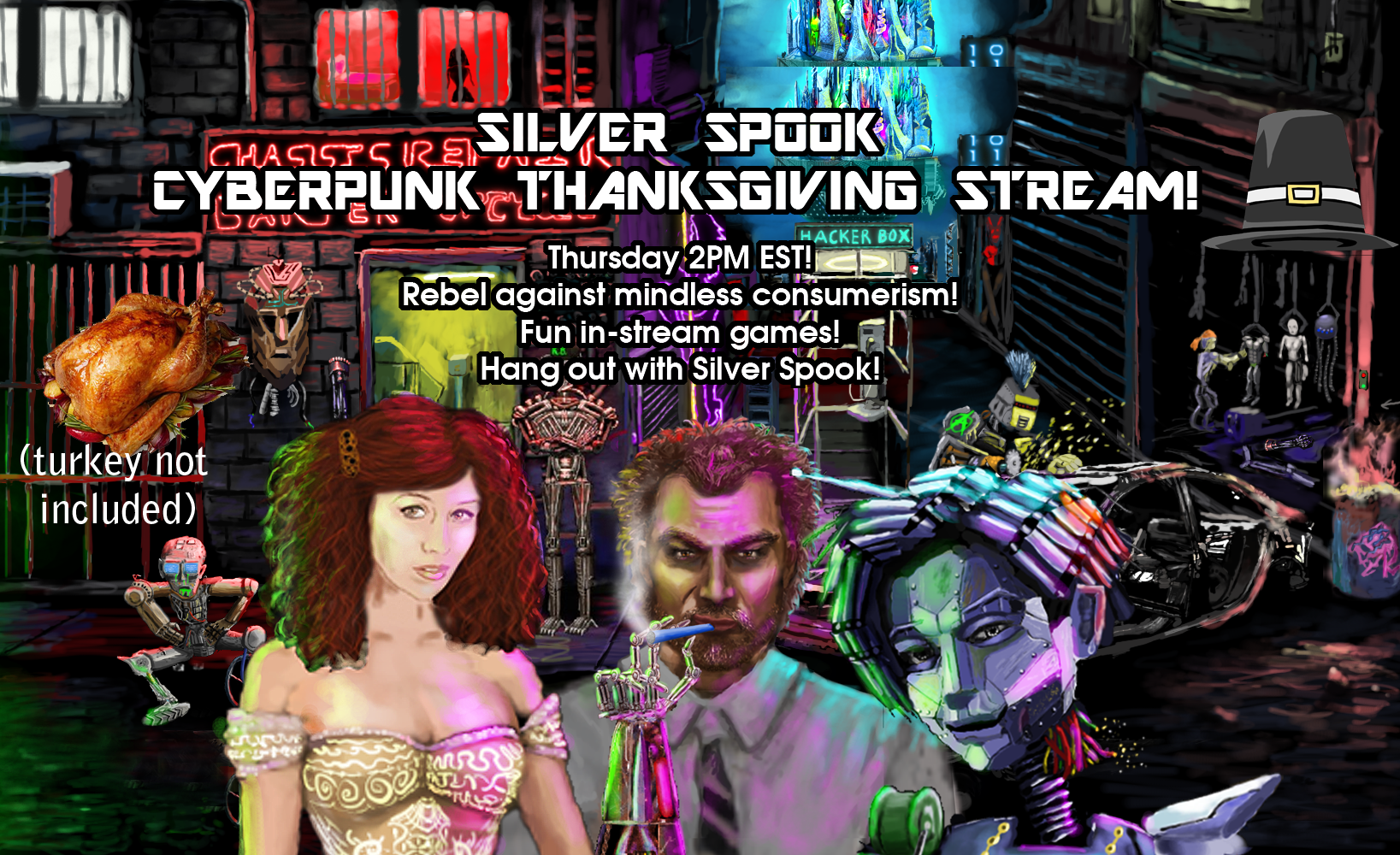 And the big news is I will be streaming live on my Youtube channel on Thanksgiving at 11 AM
Pacific Time!

Come hang out! :D In addition to the above mentioned hijinx, I will also likely be doing a bit of gamedev and making some announcements on the upcoming Silver Spook Games projects.
No turkeys were harmed in the making of this poster!

Next up, I am happy to announce that I am currently in the process of porting Neofeud to Mac, and have a potential solution in the works! I can't give any specific dates on a release, but it is definitely in the pipeline. :)

In addition, here is the most recent Silver Spook Podcast where I talk to the creator of cyberpunk strategy game Spinnortality: 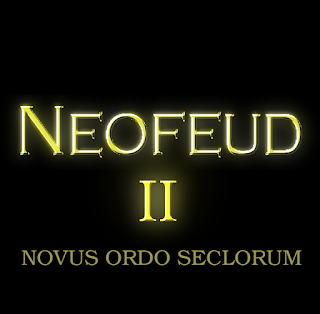 
Welcome to the The Phosphorus Endarkenment - A purported 'News Site'. An alleged 'Fake News Site'. A decried, 'Social Justice Cancer on the Nine Worlds.' A, "Weaponized disinformation scourge manufactured by the Sovions," according to the Ubizon-owned Coastlandia Post.

And, according to blue-screened mad-men on the outer spiral arms of Jovian prison-colonies, "A salvo of diatribes 'Against The Day' we live in, thinly Trojan Horsed into an SEO-optimized series of clickbait-ey quasi-game-reviews, run through AI internet-addictiveness algorithms into blackest cyber-heroin. Shoot that into your crooked alt-reality vein, motherflackers."

White phosphorus; after cluster bomb sub-munitions, the weapon-of-choice for immolation of hospital workers and innocent non-white, non-human children in some-country-with-resources, and other tokens in the massively multiplayer idle-game that is our un-Holy Roman Collapsar.

Phosphorus. A solid, nonmetallic element. In one of three allotropic forms, it is yellow, poisonous, flammable, and luminous in the dark.

The stricken match, the igniting flame, painful brightness. The color of nuclear flash, the color of orgasm. Ecstasy and annihilation.

The Enlightenment; also known, however correctly and erroneously, as "The Age of Reason". Aufklärung. Demise of monarchy. Came to advance ideals like liberty, progress, tolerance, fraternity, equality, constitutional government and separation of church and state.

The Enlightenment; an age whose time and ideas have wholly passed, de facto, though infinite jesters, such as this one, continue to lob molotov phosphorus pixel-howls into the banal, painful, Neofeudal goodnight.

I shall not wholly die.

The future will grow from something. If that something is the irradiated periplaneta laying eggs in pillars of ash left standing after the antimatter blastwaves, the post-anthro nano-computronium seeds of a paperclip-pushing Accelerando panspermia, or some semblance of those fleshy-assed hypersynaptic monkeys we're rapidly no longer being, it will be something. Life Finds A Way, even through darkest, eldritch midnight.


In this episode, Silver Spook speaks with Mark Yohalem, writer of Primordia, a legendary sci-fi point-and-click adventure game and a big inspiration behind Neofeud. Mark and yours truly discuss the State of Adventure Games which somewhat resembles that of Schrodinger's Cat (never quite alive or dead!), Primordia and the making thereof, Mark's exciting new 'mythological, mid-apocalypse RPG' in development with Wormwood Studios, some insider game-dev shop-talk, Unity vs Adventure Game Studio pros and cons, Mark's and my favorite cyberpunk, the difference between depressing and melancholy, the psychological selling-points of post-apocalypses, why appellate lawyers may be cannibal shishkebabs in said apocalypse, and much more! Wormwood Studios (Mark's indie game company): http://www.wormwoodstudios.com/ Follow Mark on Twitter: http://www.wormwoodstudios.com/ Neofeud: http://store.steampowered.com/app/673...
Posted by Unknown at 12:17 PM No comments: