Gemini Rue and The Meta Puzzle in Adventure Games

I'm probably a bit more than halfway through Wadjet Eye Games' cyberpunk-ish point-n-click adventure, Gemini Rue at the moment.  Before you read anything else, go fire up Steam or GOG or even better, buy this game directly from Wadjet Eye because it is possibly the best adventure game I've played that's come out in the last decade or two.  It's solid story and storytelling, hardcore sci-fi trenchcoat noir.

The gameplay is spot-on -- where a lot of p-n-c adventure games get bogged down in details and bucketloads of case notes, Gemini Rue is super tight and to-the-point.  Whether you're rollicking through the beautiful interstellar noir-Pittsburgh or you're figuring your way out of the supremely creepy whitewashed-lab and the ever-present sound of the nameless "Director's" voice -- there's never a point where things make no sense.  The puzzles are all logical which is a big deal in adventure games.   (Yes, I'm looking at you, Gabriel Knight 3 and you're goddamned cat mustache!!!)

I particularly like the main dude, Azriel Odin, (What an awesome freakin' name, right!?)  and his torn character.  It's tough to convey a sense of empathy and ethical doubt in a character, especially in the retro, lo-res format, but creator Josh Nuernberger pulls it off in GR.

I love the game to death, and I think it's the open-ended, multi-room puzzles that only occasionally gave me a tough time.  The times I started fidgeting for the 'Esc' key in Gemini Rue are mostly when I leave the game for a day or two, then come back, and have no idea what the mission was, on one of these bigger puzzles. It's like you've got all of these variables stored up in your mental RAM, "evil space Yakuza want x", "Screwdriver needed to fix that iPhone", "Call the drug runner that sounds like Han Solo about smuggling you to Taurus", and then you hit the hay.

Six hours office work, family birthday party, troubleshoot your Ford Taurus' solenoid, and you sit back down to play again and...

"What the fuck? Why are these Japanese dudes shooting at me, and why do half of them sound like Woody Allen? Why the hell is a detective slogging around 2090 interstellar LA with a SCREWDRIVER!? WHY DO I NEED TO BE SMUGGLED TO A CAR!??!?!?!!!"

This isn't particular to Gemini Rue, though, it's pretty common, I think, for me, in the point-n-click adventure genre.

It's like you're the Chandler-esque detective, but with no leads, wandering from 320x200 pixel Blade Runner setpiece to the next, clicking mindlessly on every 1920's lamp fixture, conveniently placed wooden crate, and femme fatale, to gales of condescending laughter from an invisible audience. Or maybe you're like the dude who doesn't even have a name (barcoded as 'Delta 6'), just woke up in some creepy secret prison/research facility, and has transcranially-induced retrograde amnesia. "Who am I? And why do I have a carrot and a piece of conduit in my inventory!?!? Goddamnit, I need to Google a walkthrough!"

The biggest puzzle in point-n-click adventure games, sometimes seems to be the meta-puzzle. As Dave Gilbert of Wadjet Eye (maker of Gemini Rue) once put it, "In adventure games you often don't know the puzzle you're supposed to be solving." Which I guess is an interesting philosophical mindstate to explore in our goal-oriented late-Western culture -- that of goal-lessness. But not knowing wtf to do can also make for an intense desire to rage-quit.

Which is why in Neofeud I'm definitely going to be adding extra hints, guidepointers, or maybe even some kind of simple journal-mechanism that briefs you each time you restart the game. Doesn't need to be a hand-holdey "waypoint" system a la 20-teens first person shooters, but just a simple summary of what you were recently doing, key objects / figures at the moment, so you can "restore" not just the save-game state, but also your mental-state. Put the short-term memory back in your brain RAM so you don't feel like you just had a stroke or a brainwipe from the MiB.
Posted by Wintermute at 10:46 PM 2 comments:

A Song of ICEbreakers and Firewalls - (Our Workstation Asploded!!!)

Citizens of Coastlandia, Silverspook Games bannermen...  I hate to be the three-eyed raven bearer of terrible news, but... My trusty indie-game-dev steed, my Windows 7 Dell Lattitude e5510 and possibly-maybe work laptop just went utter AWOL.  All the King's safemodes and all the King's BIOS settings, can't put Humpty together again...

Presently trying with my Flashdrived Win 7 image to salvage whatever silos of PNG, javascript, and binary data, unspoilt by the contagion of bad sectors in my mortally wounded workstation...  But prognosis remains uncertain.  The maggots of poorly rolled-out Windows Update installs continue to fester, tearing registry setting from kernel, like crows feasting upon flesh of a corpse.

I have, however, at Wired and Lord Larry Page's behest, "migrated to Cloud Country", to some extent.   I have a Google Drive backup zip from a week ago of the Neofeud edifice, including game logic, level matrices, spritework etc.  I also have most of the art offlined in a Thumb-vault, canted between my Bitcoin Wallet prepper-nestegg and my scanned W2 tax forms for the past decade.  I keep my Van Goghs, Hirsts, and K. Bryants (our virtuoso concept artist), all those invaluable pocket-retirement funds sealed up tight against the data looters and bit-rot zombies.

Neofeud hath suffered a blow, not unlike the Wildlings with the death of ***** ******* in S01E01 of Game of Thrones that my wife and I just finished watching as a cheer-me-up.  A most hit-point-decimating magic missile-to-the-laptop.

(Artist's rendering of me after 8 straight Rockstar-powered hours of Dell driver-questing, hacking away at SATA configs, and generally being my own geek squad.  Also an in-game screenshot of Neofeud.)

But Silverspook Games' Library of Alexandria survives!  the Arthurian Quest For the point-n-click holy grail, the epitome of Retro-Adventure Game Perfection continues on!  Neofeudalism prevails!

(Artist's rendering of Neofeud Masthead, manifested as a Commodore-64 arcade box, played by young John Connor in Terminator 2 circa 1988)

Now I return to my regularly scheduled Westeros heroin-withdrawal, until next Sunday (or next io9 or Gawker reviewer with questionable conscience auctions leaked episodes 5-8 to the highest Pirate Proxy bidder.)

(Screencap of Neofeud prevailing through the fire and flames of computer FUBAR.)  Three parallel versions of Win 7, valiant slaying of Win Update, and resurrection of a WD hard drive later, and I've since completely restored the laptop.  Thus we continue our ascent to the annals of adventure gaming glory.

P.S.: Fun fact!  Neofeud was in fact originally inspired by spin-off roleplays of the Game of Thrones world that Mrs. Spook and I nursed our addictions on, between episodes of GoT.  The concept was "Feudal real politiks in a cyberpunk setting".  Things have evolved, but the core concept remains. 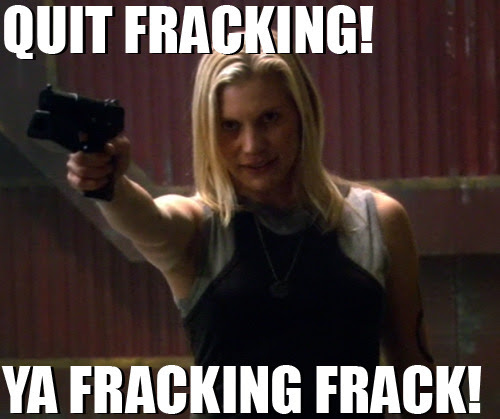 I'm writing script for my game right now and I'm at that point of having to make a decision about whether and how much swearing to include...

It's one thing when Microsoft bans XBOX users for excess profanity but what about when you're making a game?

From Grand Theft Auto's gangsta pottymouths to Q-Bert's bleeped-out cussing, video games have had a History of verbal violence as well as physical. And a history of controversy and retaliation as well. The "shock" value of having f-bombs and rated-R content in games has been played up, used as marketing by these franchises, but sometimes it can backfire, if enough people throw the controllers down in disgust. To cuss or not to cuss? That is the question.

The themes and content of our game Neofeud are somewhat stark, dystopic future-noir that partly place in a Section 8 Public Housing ghetto made out of a landfill, filled with angry poor people, drug dealers, gangs, etc.. I'm worried about the game ringing hollow and unbelievable without cursing, but also don't want to "scare off" those who are offended by swearing. I know it would be unbelievable to me since I was a social worker and know the underpriveleged don't say, "Oh darn," when they get into a fight with an ex or get served an evic notice.

I'm thinking I have a few options...

2.) Bleep out the swearing... that could be annoying?

3.) Work the "evolution of language" angle since it's Sci Fi, and insert "future slang" curse words. Like "Frak" in Battlestar Galactica, "Shtako" in Defiance, or Chinese profanity in Firefly.

4.) Rewrite the story to be PG-13 or PG. Might make the game fall flat pulling some of the punches.

Kind of at a mid-game crisis right now. I'm aiming for the indie, adventure-gaming crowd, and I'd like to reach a good size audience.

What do you guys think personally, and in terms of the entire gaming community?