If you believe that games can and should be elevated to true works of art, if you believe that we are not doomed to a Idiocracy-esque downward spiral into a hypermodern nightmare of fascist n-word spewing online game culture or neoliberal lowest-common-denominator loot-box late-capitalism or some combination thereof, then you're in for a treat with K'nossos.

Svarun Games has just launched their K'nossos Kickstarter today, for what might be the most original-looking game I have seen in eons. In the time it takes to travel to Alpha Centauri in non-FTL cryo sleep, you might never find another game like this one.

"K’NOSSOS is a classical science fiction point-and-click adventure game which follows the story of a lone passenger aboard a huge interstellar colonization ship traveling the unknown reaches of the cosmos, and the things he uncovers on his journey."

Having recently played the demo, I can say that K'nossos is a point-and-clicker's delight, especially if you're a fan of sci-fi. While puzzle difficulty can be somewhat subjective depending on how experienced you are and your personal preference, I can say that K'nossos appears to be in that Goldilocks Zone of 'not-too-easy, not-too-hard'. The plot itself is intriguing thus far, and chock-full of Star Trek-quality technobabble if that's your thing. (I'm watching ST: Discovery right now, but "Dune" or "Stasis" (the 3D point-and-click) might be closer, style-wise.) All in all, what I gathered of the science fictional story is already intriguing—this xenomorphic, xeno-aesthetic creature definitely has claws that drag the player into its Byzantine, fascinating depths.

Most remarkable though, is the art. K'nossos' abstract expressionist art style really gives this game an other-worldy feel, almost like touring a virtual high-art museum. Like a surreal daymare as experienced by a Picasso/Kandinsky fused mind. I can say, hands down, I haven’t seen a game that even attempts to do what is being done in K’nossos.

The sound track has similar megawatt-inspiration going on here, and reminds me of my MUS 412 - Post-Modernism In Music class in university, with a lot of Eastern and atonal intervals infusing meditative electronica soundscapes. It’s definitely got a feeling all its own!

So, if like me, you believe the Blade Runner 2049 box-office numbers mean that we should encourage a less-lazy, more sophisticated audience/culture, rather than dumbing everything down with explosions every 10 seconds and pretty faces, then check out and support K'nossos.

Two (three?) thumb-like, cubist appendages up—and I look forward to the full game!
Posted by Unknown at 1:47 AM 3 comments:

Should Games Have Social Commentary?

"Make America Nazi Free Again" is controversial to say in 2017. The reactions to Wolfenstein II: The New Colossus' recent marketing campaign are a sad bellwether of the low point we're at, generally.

But I did find it interesting that Bethesda is trying to make it abundantly clear that their latest Wolfenstein title is not social commentary, and any perception thereof is merely incidental. This is certainly true in the case of this game, but it does beg a larger question: should games have social commentary? What role do games play in culture generally?

Guilty pleasure games are fun. I'm a huge Doom fan. I like to chill out and twin-stick-shoot my stresses away from time to time, just as much as the next gamer. Junk food tastes good. But if all you eat every day is double bacon burgers and French fries, you're going to ruin your body, and one day you're going to have that massive heart attack.

We are having the cultural equivalent of a massive heart attack. Online gaming culture is hugely toxic, with Pewdie Pie's fiasco revealing the tip of that ugly iceberg. And beyond the world of gaming, we have flag-waving, Swastika-wearing Nazis marching through American streets. Half the country is in poverty, several dozen cities have poison for drinking water, and our infrastructure is collapsing.

Escapism in entertainment is great, and sometimes necessary. But if everyone just escapes to the virtual, the real will just continue to get worse.

I believe that generally, yes, games should strive to engage with the society in which they exist, where possible.

This doesn't mean that games all need to be thirty-minute "walking simulators" which simply communicate a message, without much more "game" there. Games can, and I believe should, be *both* compelling, engaging, experiences, as well as thought provoking, challenging journeys that are relevant to the society in which they are created. At the very least, games should not promote negativity. Sort of a hippocratic oath for gamedevs: "Do no harm". 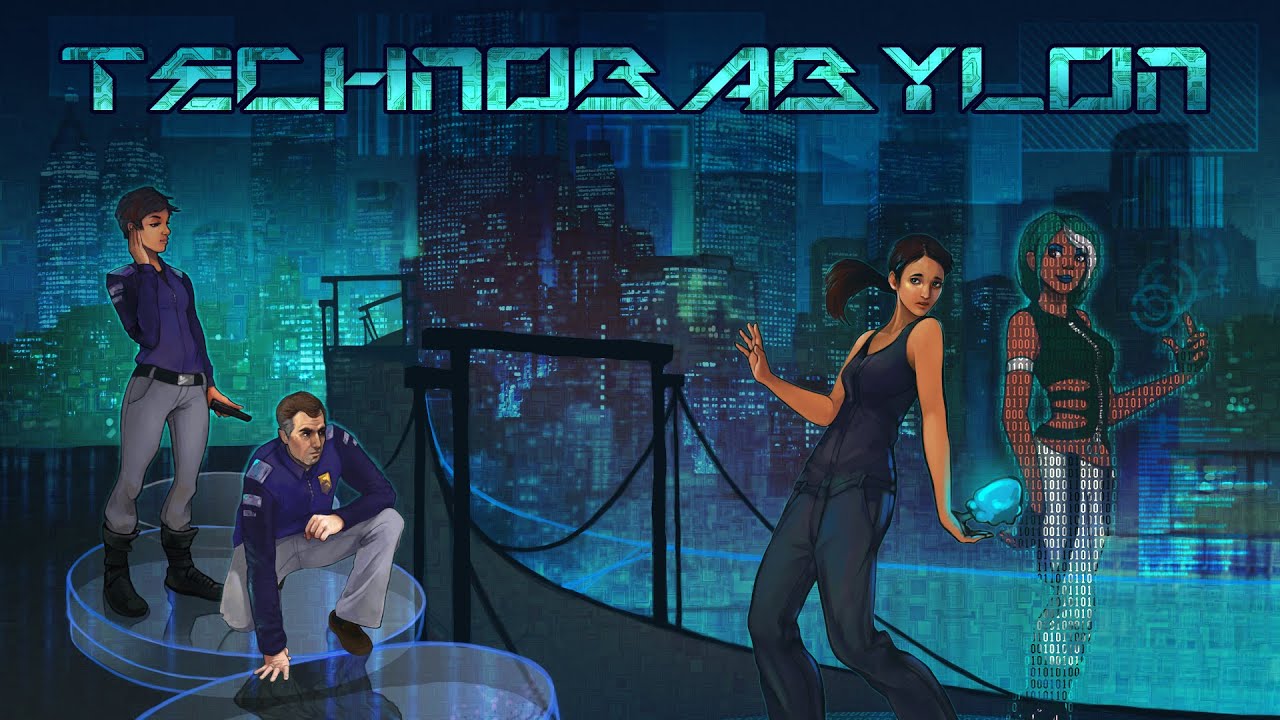 Technobabylon examines the great potentialities of technology to better society, as well as the pitfalls of techno-addiction, disconnection, and abuse. It is a great example of a game that handles diversity incredibly well, treating characters, "As characters first" with gender, sexual orientation, race, etc. being just another facet. Planescape Torment and Undertale are fun, yet challenge players to think about the nature of RPGs, among other things.

Deus Ex not only revolutionized gaming by introducing the FPS/RPG hybrid, but touched on a plethora of topics from transhumanism to mass-surveillance to the need to 'question everything', especially information sources -- something increasingly relevant in our milieu of 'fake news' of all sorts. Games like Fortnite are suggesting that a positive online gaming experience not filled with slurs and hate is indeed possible. 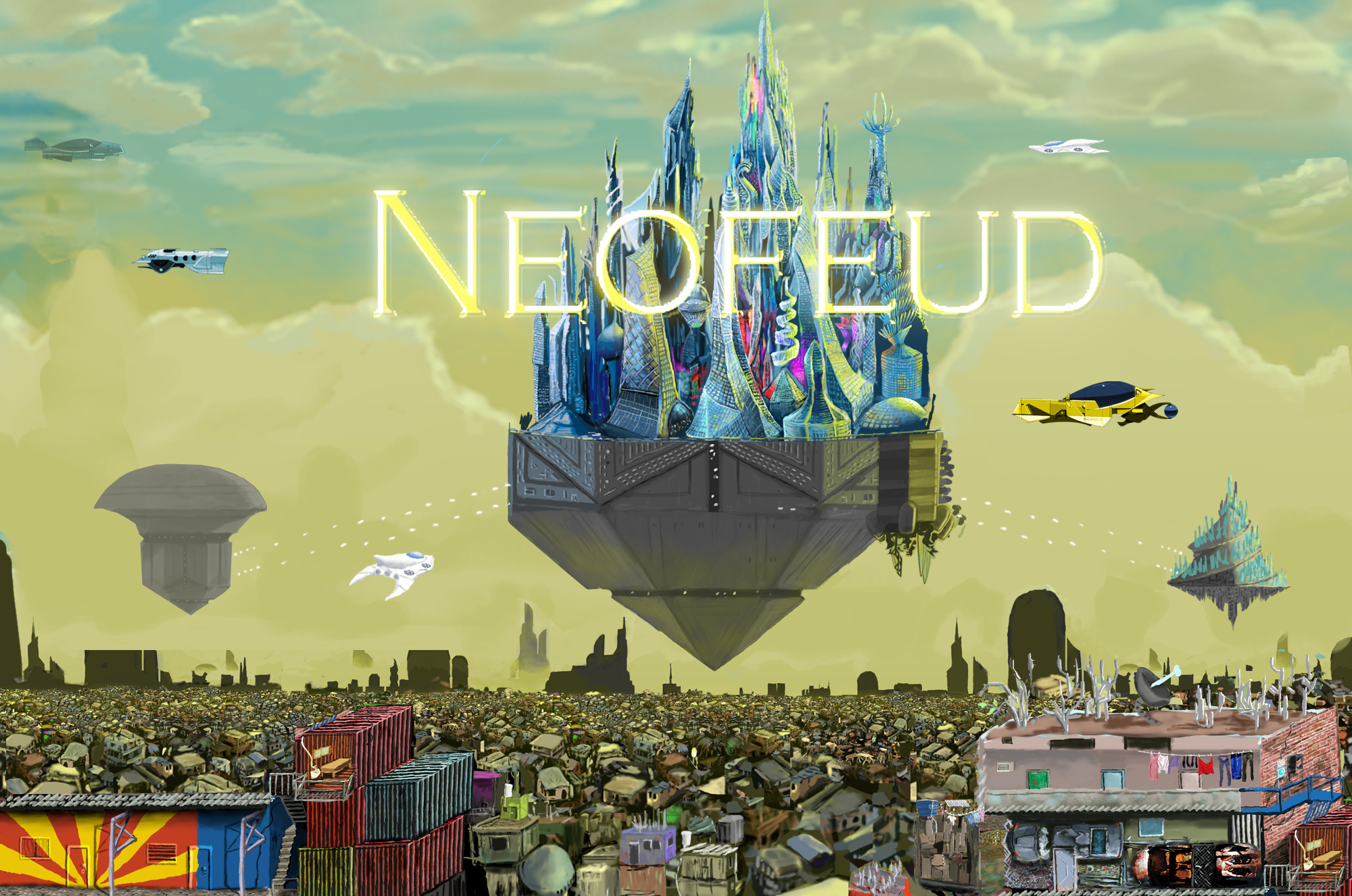 I spent about 2 1/2 years making a cyberpunk point-and-click adventure game called Neofeud. Neofeud is a science fictional "cautionary tale" in that it suggests a pretty dark potential future, one that we'd probably like to avoid. In Neofeud, the trend of increasing inequality has continued to the point where the elite have become literal kings over the destitute commoners. There is the equivalent of the Palace of Versailles literally floating above an endless cross between an L.A. slum, a Mexican shantyland and a gargantuan Blade Runner 2049-esque landfill. It’s a world where the marginalized (robots and chimera part-humans) have to pass a ‘consciousness test’ to even be *considered* a person, and are easily discarded, disappeared, used for borderline slave-labor or to prop up a prison-industrial complex.

Neofeud is a world in which democracy is not merely in jeopardy, as it is today, but a footnote to history. There is no constitution, no civil rights, no labor rights, no human rights -- all the progress since the Enlightenment has been rolled back. It's a scary, but easily plausible world, if good people simply do nothing but continue the status quo, day in and day out.

While Neofeud is a 15+ hour game, and engaging in and of itself (at least it is meant to be), it was deeply influenced by my own experiences. I am from Hawaii, and a native Hawaiian, who grew up in the ghetto. Yes -- they do exist, even in Hawaii. Most of the folks in my neighborhood were and still are non-white, and a large percentage are immigrants. Families in my neighborhood were and still are sardined packed, with ten or twenty relatives squished into a single-family house. Pork and beans or vienna sausage over rice on a daily basis was the norm, growing up.

After college I taught an after-school STEM (science technology engineering and math) program to under-resourced youth in Honolulu. Many of the kids I worked with were in truly horrible circumstances, many with parents incarcerated or out of their minds on drugs, many homeless, living in vans, some even getting beaten in the street for sleeping on the sidewalk. These were kids who had parents in prison, or perhaps even worse, parents who were working multiple jobs and *still* they were living out of cars or tents. And right up the street, there were multi-million dollar mansions. I myself, along with my wife and kids, were just barely above homelessness, and spending over half my teaching salary to squeeze into a tiny studio or one bedroom.

You could say that Neofeud has a "message", but in another sense, Neofeud is simply me sharing (through the lens of science fiction) my story, and the stories of people whom I have worked with and loved, but whose experiences and voices are often buried. It is my sincere hope that Neofeud doesn’t merely entertain, but also makes players think about the world we’re in, and the one we're heading towards.

The reviews for Neofeud have been mostly positive, but there have been a variety of reactions to the social commentary aspects:

"Has something to tell and does this in a brilliant way, without hitting you in the face with his message."

"It was too real, too on-the-nose. It gave me chills and made my stomach roll." (To be fair, this reviewer, I believe, meant this in a positive light, but there were a few others who expressed something similar.)


Truth be told, I would much rather be criticized for "having a strong message" rather than making a game without much substance, or merely an entertaining product.

The pre-requisite to democracy is the existence of an informed, civil society, that is capable of governing itself. A network of communities that interact and engage in discussion -- not just insults, caricatures, and flame war. A civic community is not just a hoard of shoppers or a million fans fawning over a movie or game or tech gadget, or a comment section full of people getting their rage "fix" without actually listening to arguments from the other side, or folks angrily blasting avatars of each other and shouting the n-word over voice chat.

So how can we prevent that? One way is by creators making more intelligent, relevant, challenging, and simultaneously enjoyable experiences, along with players, journalists and readers who demand, appreciate, and discuss these games, and other content. Ultimately, I applaud Bethesda for doubling down on their anti-Nazi stance and marketing campaign.

And I think that we all should double down on taking stands on things we believe to be right -- in our games, and society at large -- while we still have a (relativity) free society in which to do so.
Posted by Unknown at 3:54 AM No comments: