At long last, Neofeud will be out on Steam this Tuesday, September 19! 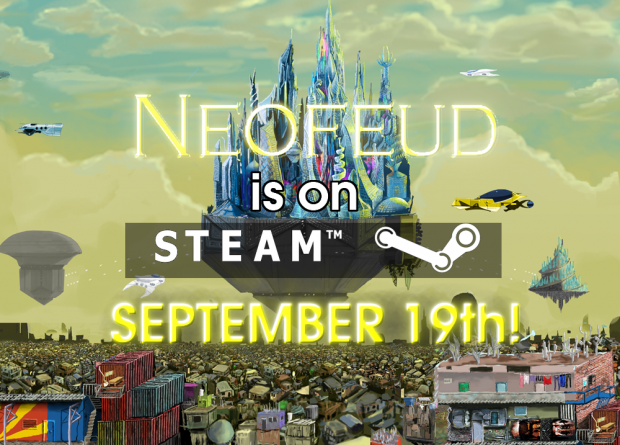 The game will be on sale during launch week at 20% off. The base price is $15, so you can get the game at a steal of just $12 for 15+ hours of gameplay, according to latest estimates! The Neofeud soundtrack, which includes 45 tracks and 2 1/2 hours of music will also be available for purchase on Steam.

Here's a recent interview I did with David Cameron of One Up Gaming, where we talk about Neofeud and the modern indie game scene:
The press on Neofeud has also been ramping up lately, and it has been featured recently on sites including Hardcore Gamer, Gamers Global, and Gamasutra.

Here's a roundup of the reviews for Neofeud thus far:


“The conspiracy runs deep and is quite massive in scope. Politics meet technology, philosophy meets madness. But even beyond the intrigue itself the world of Neofeud is quite a detailed and intriguing construct, with its own history and lore.”


"Taking a little more than 15-hours to finish, Neofeud showcases a deep tapestry of plot twists and turns, rich backstories, and action weaved throughout the point-and-click gameplay."


If any reviewers are interested, I do still have Steam review keys- let me know!
Posted by Unknown at 10:35 PM No comments: