So here's a little personal slice of life you all who are wondering what goes on while I'm making all these crazy indie games. :)

As I'm working on the latest Silver Spook Games project, I've noticed some sort of allergic reaction going on in my head and lungs over the past week or so, though. Apparently some sort of new flower, bush or tree has decided to shoot its tree-sperm into the air and now I can't think straight and keep waking up in the night feeling like I'm choking! Goddamnit pollen!

Not such great timing as I need all the mental firepower I can get to finish off this new game prototype that I'm working on called Forgotten City which I need to get done by June 30th to enter into this Adventure Game In a Month competition. I was out of commission for a lot of yesterday, and simultaneously the internet gods decided that this is a great week to turn off the spigot on the bandwidth pipe, which caused my livestream to go into anaphylactic shock, along with my human body. (Noirjyre can attest to this! Thanks for sticking around through the 0.1 FPS bits of the stream, Noir! I'd give you a Steam achievement if Neofeud was on Steam yet!)

It was kind of alright since Mrs. Silver Spook had a ladies' night out last night anyway with a bunch of other moms. They went out to a restaurant in town and then went to see Wonder Woman. So I was playing crazy games with the kids and making dinner (microwavable chicken nuggets FTW!) and having them walk on my back and such. Then we got to bedtime routine which involved lighting lavender incense and floating it about the room (a sort of psychological trick that reassures them that there aren't any 'bugs' -- spiders roaches -- even though there aren't. Then bedtime step 2 is I put on this Miyazaki music internet mixtape, then read them bedtime stories. Then step three is praying that Minobot prototype 2 (3 year old son) wouldn't totally flip out when mommy wasn't there for night-night. He also goes into a sort of anaphylactic or emotional shock when it's sleepy time and mommy's not there. He woke up about an hour in screaming, and so I had to come back into the room and lie down on the floor next to him to get him to stay down and stop crying.

Finally got him down but unfortunately I was having choking feelings all night, like right at that point where your breath starts slowing down, my brain kept waking me up and telling me that I was suffocating or drowning. I really hope this allergy shit goes away and the Loratadine starts DOING ITS ONE JOB so I can not be a 10 IQ sleep-dep zombie during this final week of gamedev before the competition.

Anyways, one other thing, some of you may have caught on the back channel is that I'm working on building a tree house -- actually, I'm technically trying to install a makeshift ladder into a 'hazard tree' that is leaning like a sword of Damocles over our house at the moment. I need to get the ladder up so I can get to a point on the tree high enough to cut it such that it doesn't endanger the house. But my daughter has been following me up the ladder, and has invoked her powers of "Children's Eminent Domain", claiming the tree installation as her "Tree House". (Never try negotiating children out of their daydreams -- it makes negotiating with terrorists seem like a cakewalk). So what's happening now is I'm planning to convert this horrible danger to life, limb, property and mental health called 150 foot Acacia tree, into an actual tree house, whilst subversely also working on chopping off the top 100 feet of it, while she's not looking. Or perhaps, I will chop the tree down to size, and convince her that it's much better to have a shorter tree house... Reverse psychology this shit and sell it as, "A Tree Tiny-House!" It works on Millenial Hipsters, I don't see why it shouldn't work on Generation Z, or A1 or whatever these whippersnappers will be called when old people need something to mean-spiritedly generalize them as. 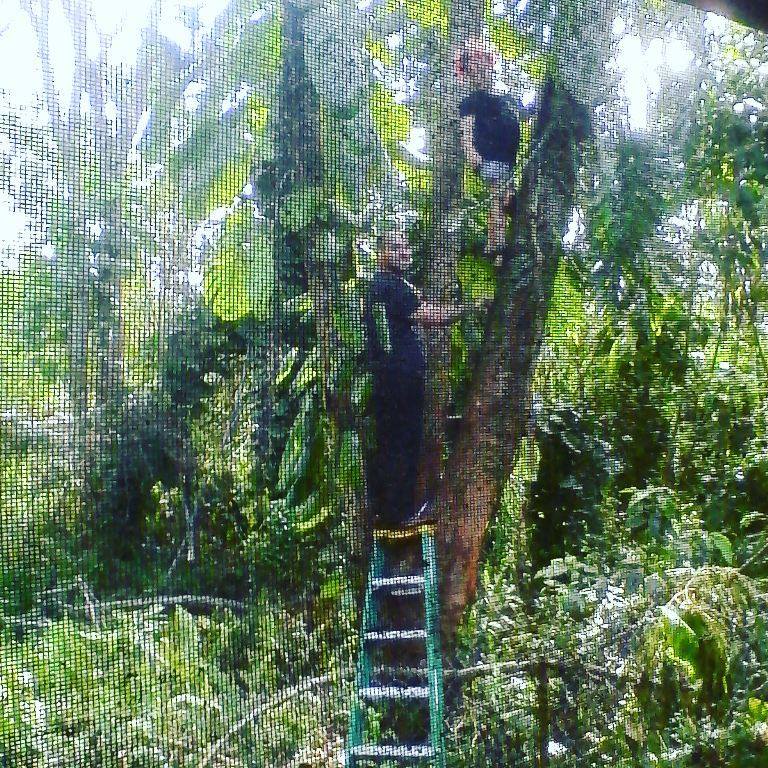 Posted by TwiliteMinotaur at 1:25 PM